Unsettling Landscapes: The Art of the Eerie

This book reveals a thread of unsettling takes on the British landscape stretching from paintings, prints and photographs made by Paul Nash in the aftermath of the First World War to contemporary artists exploring themes of memory, belonging, hauntology, dislocation and human impact on nature. In his introductory essay Robert Macfarlane explains that the eerie ‘involves that form of fear which is felt first as unease then as dread, and it tends to be incited by glimpses and tremors rather than outright attack. Horror specialises in confrontation and aggression; the eerie in intimation and intimidation.’ Macfarlane suggests that eerie art has often flourished at times of crisis, as seen in the work of Neo-Romantic artists around the time of the Second World War.

The works featured in the exhibition are grouped around four overlapping themes: Ancient Landscapes – features that are inexplicable and mysterious, connecting us to the unknown distant past; Unquiet Nature – landscapes and natural forms used to unsettling effect, such as trees, lonely expanses of heath and the borderlands where different worlds meet; Absence/Presence – how the inclusion (and absence) of figures and objects can generate feelings of the eerie through mystery, suggestion and isolation; Atmospheric Effect – the influence of weather, season, light and the time of day on responses to landscape. 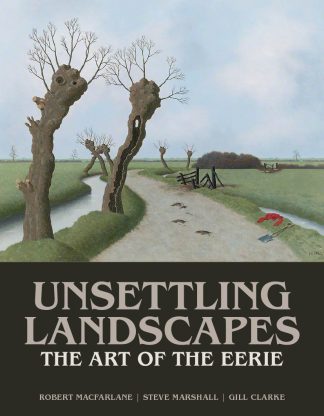 You're viewing: Unsettling Landscapes: The Art of the Eerie £25.00
Add to cart