Edwin G. Lucas (1911-1990) was one of the most unique Scottish painters of the 20th century. Born and educated in Edinburgh, he was largely self-taught as an artist, his family having discouraged him from pursuing a risky career path. Despite this, Lucas went on to become a serious and prolific painter, who exhibited regularly at the Royal Scottish Academy and Society of Scottish Artists, and staged two solo shows at the New Gallery on Shandwick Place in Edinburgh. During the 1930s he encountered Surrealism, which had a lasting impact on his creative practice. Blending Surrealist influences with his own idiosyncratic vision of the world, he cultivated an original and highly imaginative style of painting that is richly colourful and fascinatingly quirky.

Edwin G. Lucas: An Individual Eye is the first publication to focus on this unusual and enigmatic artist. Revealing the little-known story of Lucas’ life and career, it traces his development from the early watercolours of his adolescence to his boldly experimental oil paintings of the 1940s and 1950s. It also explores the artist’s final, uncompromising works of the 1980s, which were produced after a break of almost thirty years. The book draws on material from the artist’s estate, and is lavishly illustrated, featuring many of his most important drawings and paintings as well as rare archival photographs. Edwin G. Lucas: An Individual Eye accompanies a major retrospective exhibition to be held at the City Art Centre in Edinburgh during 2018-2019.

Dr Helen E. Scott is Curator of Fine Art at the City Art Centre in Edinburgh. Since 2013 she has been responsible for maintaining and developing the City of Edinburgh Council’s collection of Scottish art, as well as researching and curating temporary exhibitions. She specialises in Scottish art of the 19th and 20th centuries. Previously, she worked as Collections Manager of the Wilhelmina Barns-Graham Trust. She holds a degree in Art History from the University of St Andrews, and completed her PhD on the subject of iconoclasm in Western museums and art galleries in 2009.

Alan Lucas is the younger of Edwin G. Lucas’s two sons.  He works as a software developer.  In his spare time he carries out research into Edwin’s career, organises exhibitions of Edwin’s work, and is the author and administrator of the website www.EdwinGLucas.com. He looks after most of the family archive of paintings, sketchbooks, photographs and documents 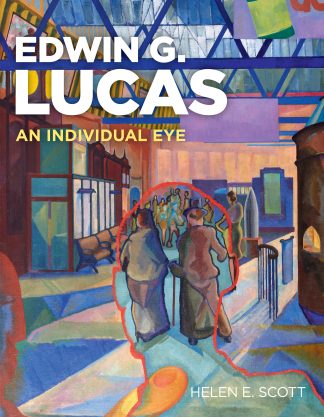