‘Nothing could be more delightful on a cold, dreary day, than Mr Wynford Dewhurst’s landscapes imbued with sunlight…’

Wynford Dewhurst was colourful and controversial character on the Anglo-French art scene at the turn of the twentieth century.  Born in Manchester in 1864, he embarked initially on a legal training. However, he showed considerable artistic flair and in 1891, at the relatively advanced age of 27, he went to Paris to gain a training.  He was immediately attracted to Impressionism;  ‘… my conversion into an enthusiastic Impressionist was short, in fact an instantaneous process.’

In 1904 Dewhurst published a book, dedicated to Claude Monet, Impressionist Painting: its Genesis and Development, the first important study of the French Impressionists to be published in English. However the book became notorious for his insistence that the English landscape tradition, especially the work of Constable  and Turner, was at the root of modern French painting. Dewhurst’s thesis was that, ‘…the French artists simply developed a style which was British in its conception.’

Dewhurst returned to France regularly each year to paint in the valleys of the Seine and the Creuse in the style of Monet, who became his principle mentor. Primarily a landscape painter, he exhibited widely at home and abroad from 1897 when his first works were accepted by the Paris Salon. In London he initially exhibited with the RBA, but also from 1914 to 1926 with the Royal Academy. In addition he was a prolific writer of articles and reviews for journals such as The Studio, The Artist, and Pall Mall Magazine. In 1913 he wrote a series of articles advocating the establishment of a Ministry of Fine Arts along the lines that he judged to be so successful in France.

After a one-man show of his pastels at the Fine Art Society in 1926, he seems to have produced very little work, and he died in relative obscurity in 1941.

The first monograph to be written on this interesting and important artist  and writer, who was an influential figure in the art world of his day

Roger Brown is an independent art historian who specialises in researching the work of British artists from the late nineteenth and early twentieth-century who were important in their time, but whose reputations have faded over the years. In 2004 he wrote the first monograph on the artist William Stott of Oldham to accompany an exhibition of his work at the newly opened Gallery Oldham. He taught for a number of years in the Continuing Education department at the University of Reading. 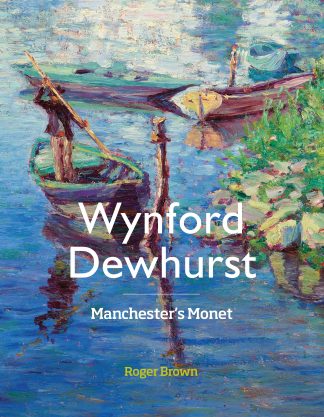