Sally Moore paints worlds where fiction is truer than fact, where outer absurdity stands in for inner reality. Like an actor, she uses her observations of people and situations to explore ideas with herself as the performer. Through surreal metaphors – tigers in the sitting room, monkeys on her dining table, small boats taking her to sea – she battles moods, fears and social expectations. She continues a figurative tradition that extends from Caravaggio to Balthus, though her active, clothed women rebut traditional depictions.

Sally Moore’s childhood in South Wales was creative, her mother a dancer and her father a painter, the house filled with artist friends, though it was shattered by her father’s death when she was just thirteen. After Oxford University and Birmingham College of Art she developed her painting with awards from the Delfina Studios and the British School in Rome, becoming one of the distinctive figure painters of her generation. This book is an opportunity to see her work across four decades. As the novelist William Boyd has pointed out, to view her paintings together is to reveal a lifelong project to explore mood, memory and states of mind. 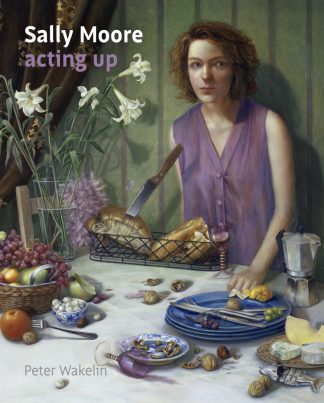