South by Southwest portrays the stretch of coast from Ilfracombe in North Devon to St Margaret’s Bay in Kent, through the unique vision of landscape painter Jeremy Gardiner. In this latest series of paintings, created over the past five years and chronicled here, Gardiner demonstrates an acute sense of his place in history, and the history of place: the geology, maritime history and industrial heritage of this constantly evolving coast, a shoreline that has long held a fascination for British artists.

Gardiner’s points of reference range from 19th-century landscape painting to Shell posters, from the St Ives modernists to picture postcards. Each offers a key to a view, over which Gardiner layers his own memory of a place, accumulated through time, changing light and weather. Capturing the hidden structures and movement of landscape, as well as the detail of harbours, piers and lighthouses, his paintings are specific though never insular.

Alongside these paintings, four essays, examine the context and innovative approach of Gardiner’s recent work on panel and paper, rarely and enviably sensitive to the spirit of Britain’s southern coastline.

‘Gardiner’s work presents a different notion of the landscape, a much more contemporary updating of the work of the St Ives artists, and it looks at time and the landscape.’

‘The moody spirit of the southern coast – from Ilfracombe in North Devon to St Margaret’s Bay in Kent – has always attracted sculptors, writers and artists. Now it has inspired the subtlest of chronicles in Jeremy Gardiner’s latest series of paintings ‘South by Southwest’, an unfolding narrative of the dynamic relationship between man and nature, sky, land and sea along the most diverse coastline in the world.’

‘Gardiner’s distinctive laminar landscapes reveal their layered meanings only over time – this is not instant art, but art which discloses itself gradually.  Its richness matches the complexity of the world it seeks to evoke, and offers back an interpretation of it which is both personal and penetrating.’ 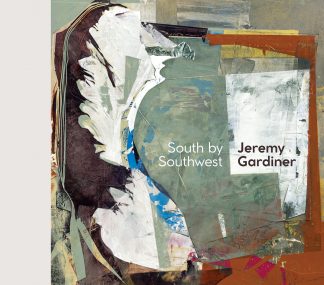 You're viewing: Jeremy Gardiner South by Southwest – The Coast Revealed £25.00
Add to cart
This site uses cookies: Find out more.