After Darkness Light: The Birth of the Liverpool Annual Exhibitions

After a period of ‘darkness’ when Liverpool – the second city of the British Empire – lacked the kind of annual public art exhibition enjoyed by many of Britain’s other provincial centres, light dawned in 1871 when a group of town councillors gambled with public funds to create the first Liverpool Autumn Exhibition. Hailed a success, the exhibition would go on to become an annual event and a cultural institution, the Royal Academy of the North of England.

From 1877 the history of the Autumn Exhibition was intertwined with that of Liverpool’s Walker Art Gallery, but it was during its first six years of growth that its immense popularity was sealed. This new study anatomises those six little-known Victorian art exhibitions, and assembles images of the key, and representative, works that were seen and sold in them.

About the author
Alex Kidson was a curator of British painting at the Walker Art Gallery Liverpool for over twenty-five years. He worked chiefly on the later 18th century, compiling catalogues of the permanent collections and curating exhibitions devoted to George Stubbs, Joseph Wright of Derby and George Romney. After leaving the Walker he wrote a 3-volume catalogue raisonné of Romney’s paintings that was published by Yale University Press in 2015. Since then he has been working on an online dictionary of the exhibits in the Liverpool Autumn Exhibitions, 1871-1938. 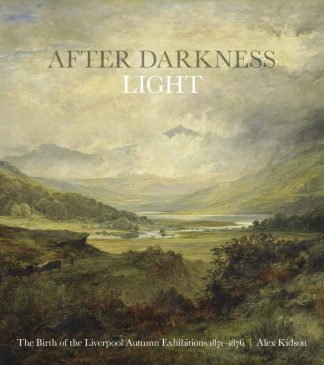 You're viewing: After Darkness Light: The Birth of the Liverpool Annual Exhibitions £25.00
Add to cart