• Sets Clarke’s innovative approach to materials in the context of the work of his contemporaries, reassessing its place in the history of twentieth-century sculpture

• Lavishly illustrated, including many previously unpublished photographs by the artist

Geoffrey Clarke: a sculptor’s materials is the first monograph to address the full range of this artist’s work, from stained glass to sculpture, jewellery to textiles, land art to medals. Initially trained in stained glass, Geoffrey Clarke (1924–2014) came to international recognition in 1952, as one of the young British sculptors who exhibited at the Venice Biennale. He rapidly became one of the most frequently commissioned architectural sculptors of the mid-twentieth century, developing an innovative casting technique using aluminium and establishing his own foundry at his home in Suffolk. Clarke’s versatility secured him commissions from banks, offices, universities and cathedrals (most notably, Coventry), which he approached with characteristic verve. Many of these works, sadly neglected, are now finding new audiences: Spirit of Electricity (1958–61) and Spiral Nebula (1962) were both listed Grade II by Historic England in 2016.

Judith LeGrove draws widely on new research, much of it from the sculptor’s archive, to illuminate Clarke’s working processes and place them in the context of not only his contemporaries but the broader history of the materials themselves. Clarke’s wide-ranging practice involved him in numerous prestigious commissions, competitions and exhibitions during a career of over fifty years. Geoffrey Clarke: a sculptor’s materials will be a significant contribution to understanding the making, exhibition and reception of twentieth-century art.

This highly readable book will appeal to all those interested in post-war British art and design. It complements Judith LeGrove’s survey of Clarke’s graphic work, Geoffrey Clarke: a sculptor’s prints (Sansom, 2012). 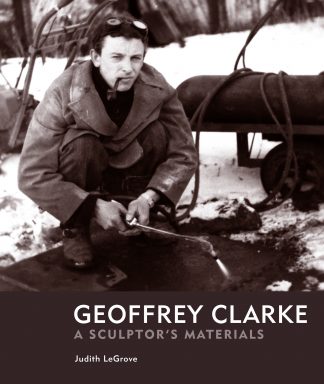 You're viewing: Geoffrey Clarke: A Sculptor’s Materials £35.00
Add to cart