Albert Irvin and American Abstract Expression, published to accompany a major exhibition at the RWA, Bristol, looks at the implication of the 1959 Tate Exhibition ‘The New American Painting’ on the work of one of Britain’s best loved colourist and abstract artists – Albert Irvin RA.

‘The New American Painting’ was the first time the Abstract Expressionists were shown in Britain en masse. It shifted the attention from Paris to New York as the centre for advanced tendencies in the visual arts.  The scale and gestural flourish of the American works was enormously significant in the development of a generation of younger British artists, including Irvin.  He went on to have a highly successful career as an artist and lecturer at Goldsmiths College, London.

With contributions by Basil Beattie and Stewart Geddes, ‘Albert Irvin and Abstract Expressionism’ explores what it was like to be a young artists in Britain in late the 1950s and to experience the American works first hand; the development throughout the 1960s and 70s of the Fine Art department at Goldsmiths College, London, into one of the most important Fine Art departments in the world; and the significance to artists of the studio and pub scene in London throughout this period.

Having taught in Wandsworth Prison to support his painting career, Albert Irvin’s part-time contract at Goldsmiths College, London enabled him to build upon his experience of the American works, and to enter a debate with some of the most challenging and innovative Fine Art educators in the UK. His meetings with Peter Lanyon in Cornwall around the same period, were also pivotal in the development of his intense colourist and painterly style, which ultimately led to a successful career as an artist. 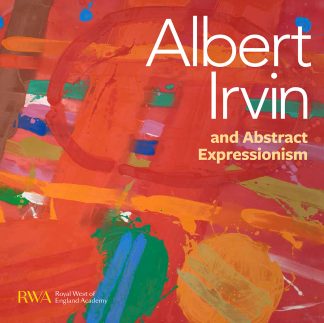