Edited and with essays by Paul Gough

When serving as an orderly in the Beaufort Military Hospital, Bristol during the First World War, the young Stanley Spencer met Desmond Chute, a 20-year old aesthete and scion of a noted Bristol theatre family. A close friendship ensued, as the 31 letters in this collection attest. Far more sophisticated and better educated, Chute introduced the older man (Spencer was 24 when they met) to classical literature and great music and, perhaps most crucially, to the Confessions of St Augustine. Chute’s
influence on Spencer’s intellectual development cannot be exaggerated.

Spencer’s often illustrated letters include some written while awaiting posting overseas, others from the battlefields of Macedonia give glimpses of his tribulations in a theatre of war, along with extraordinarily well-wrought reminiscences of Cookham,
colourfully populated with places and characters. A few, concluding, letters were written from Fernlea back in his home village, and Hampstead in the 1920s.

Desmond Chute (1895-1962) was for a while at the Slade School of Art. He became an assistant to Eric Gill, and involved in the Guild of St Joseph and St Dominic. He was admitted as a Catholic priest in 1927, moving to Italy where he was a friend of Ezra Pound. He had some success as a published writer and playwright, including a radio play broadcast by the BBC in 1955.

All the letters are transcribed for the modern reader; some are also reproduced facsimile with Spencer’s illustrations. A series of introductory essays, ‘Stanley Spencer at war and peace’, by Paul Gough give the background to the correspondence, discuss its importance to Spencer, and provide previously unpublished information about the Chute family. Archive photographs provide a visual context. 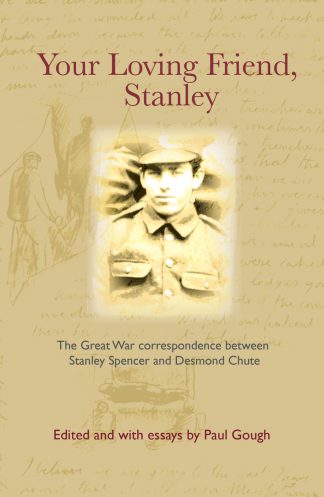 You're viewing: Your Loving Friend, Stanley £12.95
Add to cart
This site uses cookies: Find out more.