Will Maclean: Points of Departure

Will Maclean (b.1941) is one of the outstanding Scottish artists of his generation. This new publication, timed to coincide with a major display of his work at the City Art Centre in Edinburgh, provides a fresh insight into his practice from a variety of perspectives. Maclean’s work is anchored in the history, archaeology, and literature of the Scottish Highlands and the Highland people, as well as his family background and personal associations with the sea.

Born in Inverness where his father was harbour master, Maclean’s family history is inextricably linked with the Scottish west coast and the Isle of Skye. His first ambition was to follow in his father’s footsteps and go to sea himself. After a period as a midshipman between 1957 and 1959, a failed eye test cut short his career and Maclean entered Gray’s School of Art in Aberdeen in 1961. He spent another period at sea in 1968 as a ring-net fisherman which led to an important bursary in 1973 that enabled him to study this traditional fishing method in detail. The body of work, numbering well over 400 drawings, prints and watercolours, is now in the collection of the Scottish National Gallery of Modern Art.

In 1981 he was appointed lecturer at the Duncan of Jordanstone College of Art and Design, University of Dundee, where he remained for fifteen fruitful years, becoming Professor of Fine Art in 1994 and in 2004-2006, Senior Research Fellow and now Emeritus Professor. He was elected Royal Scottish Academician in 1991 and in 1997 he designed and as part of the team, won the Scottish Natural Heritage Supreme Award for three Memorial Cairns in Lewis. The British Library and Tate Artists Lives Sound Archive made a valuable recorded interview with him in 2005, the year he was awarded an MBE for services to Education and the Arts.

Perhaps best known for his wall constructions, Maclean is equally at home in sculpture, drawing, printmaking, video and installation. Combining exquisitely hand-made pieces with found or (on occasions) mass produced objects, his work balances between simplicity and complexity and invites the viewer to linger, to admire and to contemplate the universal themes which he explores. 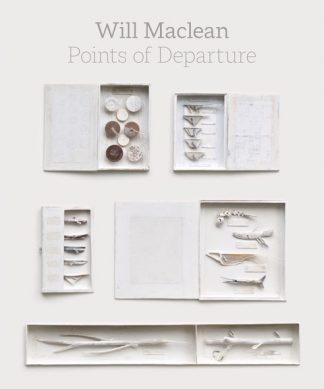 You're viewing: Will Maclean: Points of Departure £20.00
Add to cart