The distinguished artist and teacher Randolph Schwabe (1885-1948) kept a detailed diary from January 1930 until his untimely death in September 1948. Schwabe commenced writing shortly before being appointed Principal of the Slade School of Art and for over nearly two decades he diligently recorded in his elegant and well-punctuated script his thoughts and subtle comments on people and major events and his own artistic practice. Indeed, Schwabe might be viewed as the Pepys of the art-world.

Within the diaries there are passages of illuminating description of artists and critical commentary. National and international events are commented on including the build-up to World War II as well as the running of the Slade and its evacuation to Oxford to share premises with the Ruskin Drawing School in September 1939. Given Schwabe’s wide and scholarly interests and the influential positions he held many leading writers, intellectuals and patrons were known to him and also feature in his diaries including Edmund Blunden, Somerset Maugham and Father Martin D’Arcy.

The diaries include pen portraits of key figures and annotations detailing the people, places and events and to enable full appreciation of them. The Introduction provides a biographical sketch of Randolph Schwabe’s life in art together with an explanation of the editing process.

Gill Clarke is Visiting Professor at the University of Chichester and Guest Curator at the University’s Otter Gallery and St. Barbe Museum & Art Gallery, Lymington. Her other books published by Sansom & Co include Shorelines: Artists on the South Coast (2015)  Randolph Schwabe: A Life in Art (2012), The Women’s Land Army: A Portrait (2008) and Evelyn Dunbar: War and Country (2006). 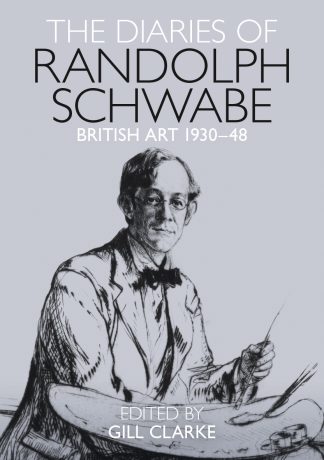