In the third quarter of the twentieth century Sir Robin Philipson (1916-92) ranked as one of the most distinguished and prolific artists of the Edinburgh School. He was an essential part of Scotland’s art establishment, serving as Secretary, then as President, of the Royal Scottish Academy. As a teacher his entire career was spent within the School of Drawing and Painting of his alma mater, Edinburgh College of Art.

This new study presents a detailed portrait of the man and his art to show how inseparable the two were. It discusses his life as a painter and, for a time, a printmaker. It draws on many archives, including some previously unavailable, to shed new light on his life and, in particular, it details his close involvement with a Borders textile company and an international tapestry studio. The book also tells how art society in Scotland’s capital operated over a half century as the narrative tracks friendships, conversations and exhibitions.

Robin Philipson was always fascinated by colour, material and process. Both an expressionist and a craftsman, his ambition never faltered as he worked through a series of themes in his art. The vibrant landscapes and figurative subjects of the 1950s gave way to more tightly focused subjects including cockfights and cathedral interiors which could explore sensation, light and space through colour, brushwork and composition. From the 1960s he produced mixed media, often large-scale, work and also began a visual commentary on human injustice and society. On retirement twenty years later his art entered a classical period of still life painting which included exotic paintings of fragile poppies. 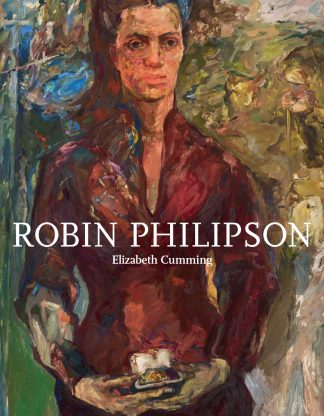