Heritage quilts and coverlets provide  intriguing visual records.  While usually made for warmth, quilts often had other purposes. They were made to declare political or religious beliefs, to raise money, to reward someone for services or to commemorate milestones in personal life or major events like war.   On another level, old quilts  reflect on art and education and Scotland’s once flourishing textile industry.

In her newest and most wide ranging book yet,  Janet Rae takes an overview of Scotland’s rich engagement with textiles beginning with the manufacture of linen, wool and cotton in the eighteenth and nineteenth centuries.  Using quilts as illustrations, she explores themes such as the impact of Turkey Red dye, the development of needlework education  and the contribution of individual suffragettes in advancing  textile design and competency.

Warm Covers will appeal to a wide audience through its personal stories of both men and women quiltmakers up to and including the present day. The ‘why’ of their often exhaustive endeavours reveals an interesting insight into a textile artistry and purpose that continues to flourish.  A generous selection of images from private and museum collections and stately homes illustrates Scotland’s own special textile story.

Janet Rae’s professional background includes newspaper journalism on both sides of the Atlantic, as well as book and corporate publishing in Edinburgh. She has written extensively about textiles and Scottish crafts and for eight years operated a small arts and crafts gallery in the Scottish Borders. As Heritage Officer for The Quilters’ Guild of the British Isles, she had responsibility for its three-year quilt documentation project which recorded over 4,000 quilts in private ownership. She acted as editor and contributor to the resulting book, Quilt Treasures: the British Quilt  Heritage Project(Deirdre McDonald Books, London) 1995. Janet is also a former trustee of The Quilters’ Guild and a member of The British Quilt Study Group and has published two papers in Quilt Studies, the  group’s journal:‘The Wemyss School of Needlework and the Business of Quilting, 1928 – 1940 (2011) and ‘The Comfy: A Social History of the British Quilting  Company’ (2012). 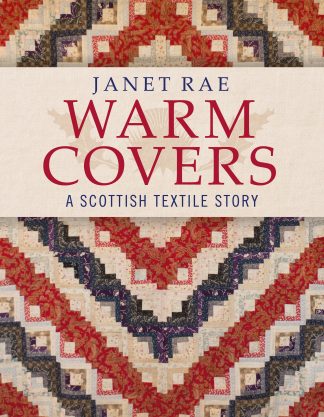