Roger Cecil (1942-2015) has been described as one of the great abstract artists of his generation, yet in his lifetime he was hardly known outside a circle of fellow painters. He was content to paint for himself, protecting his privacy and exhibiting rarely. If he did show his work, collectors rushed to acquire it. Among curators, he was a legendary figure. When his body was found after a police search in 2015, his death made headlines.

At art college in the early 1960s he was a star of his generation, but he walked out on a scholarship to the Royal College of Art and returned to practise on his own in the South Wales mining village and terraced house where he grew up. He devoted himself to painting, living simply and working as a casual labourer, opencast miner and art tutor while producing work of extraordinary beauty and sophistication. After his parents’ deaths the whole house became his studio.

This book presents for the first time the extraordinary power and beauty of his work across his whole career. Comparisons can be drawn with great twentieth-century abstract artists, Dubuffet, de Staël and Tàpies, but Roger Cecil sought to be – and was – remarkably uninfluenced. The reputation of his mesmerising art can only grow as his legacy is revealed.

Peter Wakelin is a writer and curator and an authority on art and heritage in Wales. He was formerly head of the Royal Commission on the Ancient and Historical Monuments of Wales and director of collections at the National Museum of Wales. He has contributed to Art Review,TheBurlington Magazine, Galleries, The Guardian and Modern Painters. His exhibitions have included Romanticism in the Welsh Landscape and Art for Childrenat MOMA Machynlleth, Worktown at the Ironbridge Gorge Museum and Four Painters in Raymond Williams’ Border Country, seen by 30,000 visitors at the National Eisteddfod. He lives nearAberystwyth. 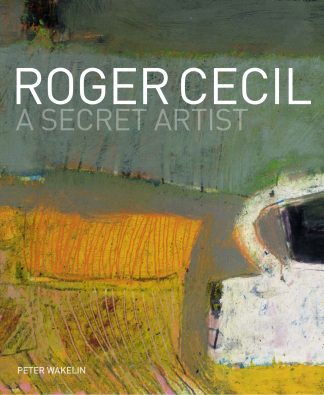