Keith New (1926-2012) was a significant pioneering British modernist stained glass artist in the 1950s and 1960s. This is the first monograph devoted to his work. It examines New’s career in the first part, while the second part comprises a comprehensive catalogue of his stained glass.

New’s career was launched with the 1952 Royal College of Art’s commission to design the nave windows for Basil Spence’s Coventry Cathedral. The three-man team, led by Lawrence Lee, included Geoffrey Clarke, another pioneer in the medium. Each artist designed three windows.  The commission brought New to the attention of otherprominent architects, including Robert Matthew and Denys Lasdun, as well as artists and critics like John Piper and John Betjeman.

Many commissions were for churches either in post-war rebuilds or in medieval buildings. Alongside these are examples in significant public buildings as well as schools. Altogether there were 34 executed commissions, five of which have been wholly or partially lost.  Through privileged access to the family archive as well as research in record offices, the authors have drawn together a Catalogue Raisonné of his known designs, both executed and unrealised.

New’s short career in stained glass maps onto the excitement generated by the 1951 Festival of Britain.  When the post-war rebuilding programme finished in the mid 1960s, the demand for colourful and expensive stained glass also diminished. Alternative directions led New to lead Foundation Studies at Kingston School of Art and to return to painting, an activity that had always sustained him. 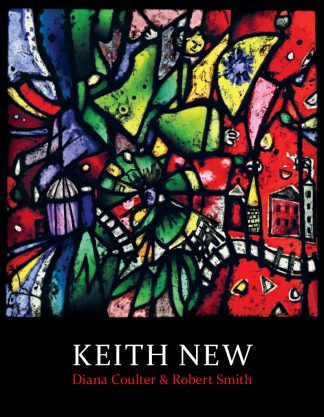