A celebration of London, captured in paint by Peter Brown.

London. As seen through the eye of a unique artist who refuses to paint from photographs in the studio, instead painting every brush stroke, sometimes over many sittings, in the middle of London’s busy pavements under the gaze of the public eye.


The book’s paintings take us on a journey into the city from its outskirts at Richmond,  along the Thames past the bridges, Parliament and the London Eye to Tower Bridge. From here, we explore the ‘electric West End’ and ‘testosterone- driven City’. Peter’s passion for hustle and bustle attract him to areas such as Piccadilly Circus and Bank in the City.

Peter still sees himself as a tourist stumbling on new areas. In this book, we join him in discovering the city and celebrating its stunning architecture and breath-taking views . . . not forgetting London’s communities, markets, parks and open spaces as Peter journeys further afield from Golders Green to Forest Hill, Wimbledon to the East End. Peter shows us London as he has experienced it: in rain and shine, under snow, from early in the morning through to sunset, twilight and into the night.

Not shy of actively engaging with the inhabitants of London as he paints, Peter shares some of his journal – recordings of conversations and chance meetings he has had. His deft skill at capturing perspective, light and movement is sure to delight art lovers, and lovers of London, wherever in the world they may be. 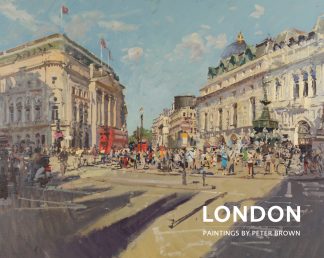