The Life and Work of Ivor Abrahams

Eden and Other Suburbs: The Life and Work of Ivor Abrahams

The sculptures, ceramics, prints and drawings of Ivor Abrahams (b.1935) occupy a very particular place in British twentieth-century art.  No artist has attempted to do what he has so successfully done – to create an entirely new kind of polychrome sculpture which operates effectively between painting and sculpture.

But his achievement does not stop there.  In a career already spanning more than 50 years, the sheer inventiveness of his work and use of unconventional materials  continues to  astonish. In the 1970s his ironic exploration  of the suburban dream, as expressed in the primness of the English home, its immaculate lawns and borders, trophy window boxes and characteristic house gables,  was followed by the  exuberance of his gymnasts and swimmers in bronze (notably in his ‘Ocean Gate’ series).  Abrahams’ print output includes his garden series and the acclaimed suites celebrating Edmund Burke and Edgar Allan Poe and showcased in aRoyalAcademyexhibition in 2010.

Abrahams’ post-Cubist architectural structures of the 1990s – epitomised by the magnificent Head of the Stairs – with their echoes of Expressionist cinema are among the most inventive products of recent years.   More recently still, a series of  owls and cockerels culminating in his ‘Parliament of Owls’ and using various media including enamel on steel, flirted dangerously with the kitsch without quite succumbing. It is that wit and edginess, that tight-rope riskiness, which continues to distinguish Abrahams’ approach from his contemporaries. 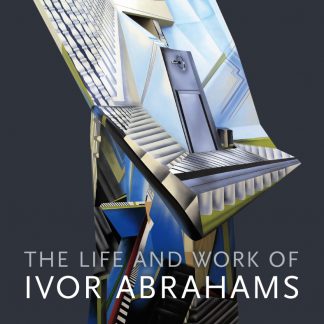 You're viewing: The Life and Work of Ivor Abrahams £30.00
Add to cart