The book weaves its way through British art including early experiments with air and studies of clouds, to representations of breath (blowing glass, balloons) and wind instruments to flying creatures (real and imaginary) and wartime skies, before considering the physical possibilities of flight which shifted our perceptions of the landscape, as aerial photography made the view of the earth from above available to wider audiences. Contemporary work introduces new environmental issues to the narrative, making reference to climate change and air-borne disease, as well as considering air as an integral component in the process of making art, to demonstrate how air is everywhere.The beautifully illustrated book includes a number of insightful essays which expand on the exhibition’s interweaving themes looking at the life of breath from a philosophical position; an exploration of our enduring fascination with the pursuit of ‘ballooning’ from the first intrepid flights in the eighteenth century from co-curator Christiana Payne, and a nebulous account of clouds throughout British art from Gemma Brace, attempting to visualise the invisible in words.

Christiana Payne is Professor of History of Art at Oxford Brookes University, where she has been teaching since 1994. She is a former Honorary Secretary of the Association of Art Historians and a current Trustee of the Marc Fitch Fund. She has contributed articles and reviews to Apollo, the Burlington Magazine, the Oxford Art Journal, and Visual Culture in Britain. Her curating experience includes major exhibitions and displays at the Yale Center for British Art, Tate Britain, the Djanogly Art Gallery, University of Nottingham and the Barber Institute, University of Birmingham.  She lives in Oxford. 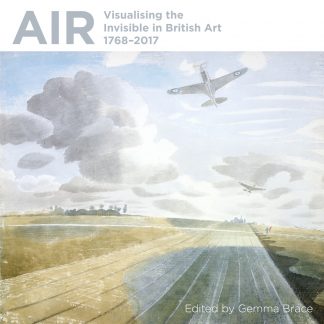 You're viewing: AIR £25.00
Add to cart
This site uses cookies: Find out more.