Publication January 2020
Orders will be fulfilled upon publication

Artist Derek Balmer looks back on a rewarding double career as painter and photographer, the latter taking him on exotic locations, while for 26 years he was official photographer to Bristol Old Vic. But above all, he says, painting has always been an obsession, an itch, ‘that won’t go away’.

Balmer was part of the exciting 1960s Bristol arts scene, which numbered among its cast list artists, writers Tom Stoppard, ACH Smith, Peter Nichols and Charles Wood, along with Peter O’Toole and filmmaker John Boorman. He wrote for the acclaimed Western Daily Press arts page brilliantly edited by ACH Smith before it was closed down by an unsympathetic management.

An early Arnolfini artist, with two one-man shows in the 1960s, he didn’t paint full time until he gave up a lucrative photography business in middle age. After early encouragement by the Leicester Galleries – Balmer was one of their ‘Artists of Fame and Promise’ – Bath dealer Anthony Hepworth gave him a timely solo show and, painting full time, he currently shows at the Catto Gallery, London and the Campden Gallery, Chipping Campden. He has also had one-man shows in Amsterdam and The Hague.

Despite at one stage being quoted in the local press as identifying a ‘common perception’ that the Royal West of England Academy was run by ‘port-sodden old buffers’, Balmer has had an illustrious career as an Academician (with a major retrospective in 2007) and for many years served as its inspirational president.

To complement Derek Balmer’s own memoir, art critic Andrew Lambirth provides an illuminating interview with the artist and writer Anthony Smith extols ‘the art of friendship’.

This is the second edition of ‘A Singular Vision’. Numerous changes have been since the first edition was published in 2012, including an additional 24 pages and a new appreciation by Andrew Lambirth.

There are more than 220 reproductions of the artist’s paintings. 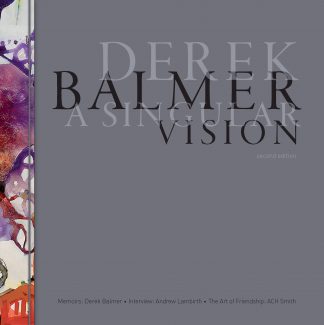